Becoming an Author – Choosing a Title

Becoming an Author – Choosing a Title

Choosing the title of your book is something only you or your editor should do.

To anyone asking for a title for their story (usually providing only a short synopsis of it…) I usually answer with these words:

Would you let someone else name your child?

Because there’s simply no way someone other than who worked hard on the book, can name it.

But sometimes you are stuck, you don’t know what to do, and even a not so simple task as choosing a title becomes an insurmountable hurdle.

So, the first question you should ask yourself is:

What is a good title?

In my opinion, a good title must

There are other characteristics that may be useful, depending on the book you write. For a series, for instance, the title could be formed by both series title and book title (I actually use a sub-title trick to enhance my brand identity).

Or for a series, you could choose a title that is repeated for each book only with slight changes, like they did for the three initial 50SoG books, changing the colour of the shades.

How do you choose a title for your book?

You wrote your book, you know more than anyone else about it. So, think of:

This is easy. Think about “Murder on the Orient Express”, for instance.

There was a murder. On the Orient Express.

A meaningful characteristic of one of your characters

Does she have blue, deep eyes? Is her name “Lucille”? Is she a particular sad character?

Maybe a book titled “Blue Lucille” still does not exists…

You can choose a sentence that has a particular meaning in the book, of course.

Does your MC pronounce a very important sentence at some point in the book? Does she cry for help in a particular way? Does he shout his fear yelling “Look out!” at his girlfriend being targeted by some bad guys? Does your MC try to get forgiveness from his partner telling her something along the lines of “Of all the time I had, I miss the time I was with you the most.” ?

Is there a preponderant feeling in the book or in one of the main characters? Did you write the book with that particular feeling in mind, or you just found it out later while re-reading it? You can use it.

You wrote and horror book and you want them to jump on their seat? “With a start” could be a good title.

You wrote a romantic book and you want your readers to get excited? “Wet and dripping” could be –

No. Please, don’t give a book such a title even if it’s really what you meant. You are a writer, do it with grace 😉

That’s all for now, folks! Hope the hints will help some of you and, as always, I’m available for any question in the comments below or on my Twitter and Facebook accounts. 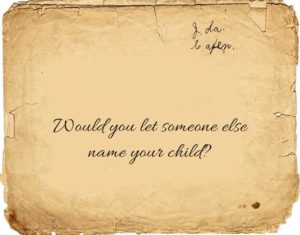 2 comments to “Becoming an Author – Choosing a Title”