Home / A Map of Your Freckles 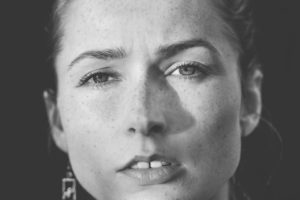 Jodie had never felt too good about her body.

Gorgeous green eyes, a bright friendly smile and her well-developed breasts weren’t enough to overcome the uneasiness that she felt every time a man got close to her. Her unique, beautiful red hair – unfortunately – had come with a huge downsize: freckles; freckles everywhere.

So many of them that there wasn’t a spot in her body not covered by them. And because of that, even in her late twenties, she was still far to get enough self-confidence to be able to maintain a stable relationship.

She was aware it was her fault to some extent, her problem. She knew there wasn’t anything strange with them… that they were just a part of herself. And yet nobody had been able to lift her soul off her curse, so far. No man had been able to make her feel at ease, as she needed.

Maybe she was wrong. As her friend had once told her, it was a problem she had to solve by herself, and then – only afterwards – look for a man to share her life with.

Jodie wasn’t sure about it. Because she rationally knew what was it about, and yet had been unable to overcome it by herself. She hadn’t found the keys to her own subconscious, yet.

She was happy, she had a good life, a nice job, a lot of friends. But her romantic side was maybe still waiting for the prince on a white horse that every woman desires.

She wasn’t sure a prince would like freckles either, though.

And in any case, she knew no prince. Actually, the only man she could say she knew was Matt, her former neighbour from the time when she was still living with her family, years before.

They had been friends for ages. They had overcome together infinite hurdles: broken relationships; puberty; the first delusions at work; the death of her father and of both his mom and his dad.

Probably that last event had been the one to connect them the most. The day of the funeral they had been together for long and, in the end, she had ended up at his place. They had talked – or better she had listened as he relieved his heart of the weight –  and they had slept together. It had been the first time she had slept with a man, the first time she had cuddled with one besides her father, caressing his head as he cried on her shoulder until both of them had fallen asleep.

They had had no sex, of course: she hadn’t even thought about it. Nor – she had wondered afterwards – he had.

She was sure. I twas the day of his parents’ funeral and, anyway, Jodie wasn’t even sure her friend saw her as a woman at all.

Yet, something had changed that day, inside her. She had realized afterwards that that simple, tender contact had made her thrilled, excited as she had never been. From that moment, the realization she had had a man so close to her for her entire life – a man with whom she seemed to feel completely at ease – had taken her over. And now that she could see him with different eyes, she had noticed Matt wasn’t her childhood friend anymore: he had become a man.

They didn’t speak about that night for weeks. Everything went back to the previous Matt-Jodie relationship, made of jokes and inappropriate questions. And yet she couldn’t forget about his tears, about his smell, about his body pressed against her, about what she had seemed to feel the morning after as he continued sleeping against her: a strong, healthy erection.

Sometimes, she felt thinking about sex as an outcome of such a sad situation was both naughty and inopportune. Wouldn’t she take advantage of him, of his weakness, if he had tried to win him, now?

But today it was different. Matt had invited her out and, if that wasn’t a date, it was the closest thing to it they’d ever had.

A dog exhibition: an event when to admire her most beloved animals. She liked the idea. As always Matt knew her better than any other man. He seemed to remember every detail of all their conversations. In the beginning, it was almost scary, but in time it had become a joke between them, that he was her memory and – as such – he had to remember everything. He even remembered the first time they had met, of which Jodie felt bad to have no particular memory.

The date at the exhibition wasn’t the first time they were out together, of course, but this time she was feeling everything in a different way.

When he reached out to her hand to pull her through the crowd to the front places to see a run she really wanted to see, the shivers the felt down her spine made her sure it was a date, at least for her. Later on, when he didn’t let her hand go and, instead, squeezed it even more, when she felt her panties getting damp and sticky against her sex, she wondered again why she had never noticed him.

Matt wasn’t a handsome man, but he was good, tender, introvert enough to actually care about the effect of his actions on the others; always attentive to avoid hurting her.

That day, they didn’t have sex, though. They separated with the usual kiss on the cheeks, even if for a split second, it seemed to her their lips were going to meet.

Jodie didn’t want to wait for weeks, again. If he really liked her, too, she had to give him a little push. It was her to invite him for a date, this time. At her place, for a dinner together, and Netflix afterwards. She hoped he would get the reference.

The evening went smoothly. She had expected him to be a little more active than usual, maybe to dress better or to bring her flowers, but he did neither.

The movie was about a woman that had been abandoned by her husband because – he had said – too fat and ugly, and had decided to take revenge on him.

Even if it was enjoyable, at some point something snapped inside her. Her insecurity, her doubts, everything arose at once and silent tears began lining her cheeks.

Matt – whose attention had seemed to be to the movie so far – did nothing more than sliding his hand on the back of the sofa and circle her shoulder.

If the movie continued to play, they didn’t realize it. There were only their bodies now, their breaths and the consciousness of a contact that was – once again – getting them closer in a way that transcended mere sex.

When her sighs faded away, the movie had already finished. They had spent a long time in silence, even if they were both a whirlwind of questions and sought answers.

It was Jodie to break the silence, at some point. She didn’t lift her head from his shoulder before speaking, though.

That had escaped her without even realizing she was confiding him her most intimate doubts, the strongest of her insecurenesses.

The time passed and he kept silent. Her heart raced, wondering what she had done wrong. Then he did something she would never expect, from Matt. The tender, gentle, shy boy she had known for long, became suddenly a man who knew what to do, what to say.

He pushed her away, and for a moment she thought he was going to leave her. But instead, he caressed her hair, her face lined by the tears, her red eyes that she couldn’t keep open while her mind got blank at his touch.

“I’ll count your freckles, all of them, again and again, and you’ll feel how much I adore them,” he said caressing her face, tracing an imaginary line between her eyes and cheeks with his thumb.

“I’ll draw a map on them, and in that map, I’ll discover all the treasures of your world,” he added, his fingertips grazing her neck now, sliding down her shoulder.

Did he just, really say, “I”? Jodie’s heart was racing like a horse, now.

“And if you’ll get fat, I’ll enjoy the smoothness of your tender skin more, the presence of your body against mine, when I embrace you.”

She was crying again, now. But the reason was different. Was this really Matt, talking? He had never been like that… she had never had a chance to see such a side of him.

Matt was a river in flood. Words came out of him without thinking: her presence had filled his soul, her cry melted the knot that had been stopping his feelings to come out.

“Jodie,” he said caressing her chin to turn her head towards him. “Each of your imperfections will be my perfection, forever.”

That man had found the words she had always needed, and nobody had never said.

The kiss that followed was sweet and tentative, like wandering into an unknown territory. Their lips met and played with each other for some time, while her tears became a smile, his hand cuddling her shoulder and back became a passionate hug.

Then, it was sex. The best sex Jodie had ever had. There, on the sofa, she was the one removing her own clothes, the one showing him, willingly, her imperfect body. And Matt accepted it with the adoration of a lover and the care of a friend.

Jodie let him take his time to kiss every inch of it, while she just laid there, with her eyes closed enjoying for the first time a man loving her. She let him linger on her huge breasts, savouring her nipples with eager, trying to understand what she loved and what she didn’t, only by the rhythm of her moans.

When his kisses moved lower, she willingly spread her legs, remembering too late to stop him, that she had not trimmed her hair. But his tongue was already on her clit, her hips dancing back and forth to teach him how she liked it, how she wanted to be licked.

But God, if he was good! Jodie exploded so soon that her orgasm took her by surprise. Her back suddenly arched, her legs gripped his head with such strength that she feared to hurt him, for a moment, yet unable to control the overwhelming emotions.

As the waves of her pleasure faded away, his smile – more than his tongue licking his lips of what was left of her juices – reassured Jodie once again.

Then she knew it was her turn to please him. She knew it would be fair to suck him, to lick him as he had just done to her, and that’s probably what Matt thought when she stood up, pulled him up and pushed him back down to sit on the sofa.

But she didn’t kneel in front of him. As long as she wanted to taste him, she needed to find the comfort of his hug again. And so she climbed onto him, sat astride of him, guided his standing cock inside of her damp sex and pushed her body down to hug him. She could feel his chest against her breast, his lips against hers as they started to kiss again, his cock pulsating deep inside her, stretching her… it was the best hug, ever.

They fell asleep like that, connected, together, right after his orgasm inside her.

Her body now was not only hers, anymore. She had nothing to fear.