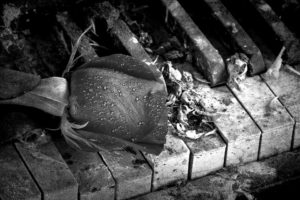 Rosetta had never talked to that man too much, even if he had been her tenant for a couple of months already. The small apartment she had inherited from her grandmother and that she had rented him was on the seventh floor, under the roof, at the top of the building, out of the sight of indiscreet eyes and out of the reach of irascible ears.

That has to be said, because the man she couldn’t even remember the name now of, answering to the questioning of the police, was a musician. He was used playing the piano all day, and she remembered he had been very happy when he had seen that studio on the top floor. It had been difficult for him to find a place where the neighbours were willing to tolerate his performances.

Indeed, he used to play all day, from morning to evening. He used to play even in the night every now and then, usually slow, melancholic melodies that drifted out of the oriel window to reach even her ears, at the first floor.

She had never been particularly attracted to music, and yet the notes played by that man charmed her. She had gotten used to it, and to the calm dreams those melodies induced in her.

The tenant was Italian, and probably because of his bad English Rosetta and him had never had chances to get closer. Yet he was a person that – willingly or not – had had some kind of impact in her life.

On the night of the disaster, before the fire consumed everything, she had fallen asleep embraced by the notes of a tune that – for once – had seemed almost cheerful.

She didn’t know why, and now she would have never known.

Rosetta had fallen asleep with a smile and had woken up with a mask of terror, her husband calling for her over the scream of the firefighters’ sirens.

Everything had felt so unreal. The evacuation, with all the people coming out from the building in their pyjama; the thermal blankets the rescuers had put over them, as they sat on the grass in the park in front of the building, watching the last two floors being devoured by the flames; the fairy-tale-alike orange the still alive fire coloured the sky over the building of, beyond the top floors.

Then, reality struck. Her tenant was not around, he wasn’t among the people sitting in the grass, he had not reported to anyone. He was the only one missing.

Her heart sunk, as she hoped with all her might that he had been out for the night. Because of a performance, because of a lover, because of-

But she remembered well that unusual melody she’d fallen asleep with.

They found him dead on the stairs that led downstairs. He had supposedly tried to force his way through the fire, without success.

It took two days for them to be able to return to their apartments, weeks before they got access to the top floors again. The pain was still there, and yet rapidly fading away: they hadn’t known each other for long, there was not much to miss but the way he made the air vibrate.

She stopped in front of the half-burnt door, brought the rose she was holding in her hand to her nose and breathed deeply, as to intoxicate herself with that scent instead of the cinder, death one. Then she kicked the door open and entered in the small studio.

It seemed a scene out of an old, black and white movie: everything was in shade of black. Everything, but a corner on the far side of the room.

Strangely, the fire had consumed everything but that single place. And there stood an old wooden desk and on its surface, among tenths of scorched piano scores, lay an open book.

She covered the distance that led to the corner looking carefully where she landed her steps, and reached the half burnt piano that was miraculously still standing by the desk.

She caressed the half-burnt keys and tried to press them, but they made no sound. The piano had died with the owner.

The music was not the only thing she knew he had loved, though. More than once, she’d seem him smelling the roses that adorned the entrance of their building, the very same roses she was used taking care of.

She laid one of those roses on the piano and – before her eyes began watering – she looked at the tome.

It was an Italian-English dictionary, and there was only one section circled:

2 comments to “The Unusual Melody”