The Room of Ungranted Wishes

Home / The Room of Ungranted Wishes

The Room of Ungranted Wishes 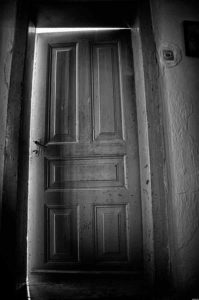 It was pitch black beyond it and it felt strange: he couldn’t see a thing inside, even if the light in the corridor was supposed to illuminate at least the first couple of steps.

Yet, the presence of Ron – his guide and friend – behind him was somewhat reassuring. He took the first step, then another, and – tentatively – the third one. Then the door behind him shut with a dry, loud click that gave him a start.

He remembered the words Ron had told him months before when he had first given him a tour of the mansion: “Never, ever enter into that room,” and a chill run through his spine.

The room had been locked every time they’d tried to open it, anyway, and even if he – or the other guest children at the mansion – had often desired to enter, no one had ever managed to get the keys for it.

There were legends whispered among the guests of the mansion, though: legends of children disappeared beyond that door years before, generations before, and never came back.

That’s why when Tom had heard about the disappearing of his best friend, Luke, he had instantly thought about the forbidden door and had frantically looked for its key.

When he had asked Ron for it, though, he had thought it wasn’t a good idea to meddle in things they didn’t know. But Luke was a friend and, in the end, Tom had managed to convince Ron to give him the keys. Under one condition: he would have accompanied him into the room.

And there they were.

Suddenly, the lights turned on. Tom closed his eyes, then slowly opened them in a slit as he started to get accustomed to the glare.

His mouth opened, his jaw fell in amazement as he looked around. He wasn’t in a room anymore:  he was in the strangest place he had ever seen. It was a vast garden, circled in high marble columns in between of which were stairs that led up into the sky – so far that they got lost in the clouds – alternated with stairs leading somewhere below the garden.

There was no sight of the door anymore; not too far from them, he could see a pile of strange items and tools: a wooden astronomical globe, boxes of golden coins, swords, spears and knives, chairs and – among them – devices that appeared to be very old and of which Tom couldn’t have even guessed the purpose.

He asked his friend and looked at him. He had sat on the ground and – even if he was just a couple of years older than Tom – didn’t seem particularly worried about the situation.

“It’s the Room of Wishes. I told you to never come here. There is no way out.”

“The Room of Wishes? I never… never heard of this before!”

Tom panicked. He ran around the place looking for an exit; he checked all the columns to find an inscription or a helpful hint. There was nothing: nothing but those endless stairs.

He tried to run up one of the stairs and – to his uttermost surprise – he ended up coming out of other, adjacent stairs. All of them seemed to be connected, all of them seemed to lead to nothing but the same garden, even if he had been climbing them up all the time.

“Help me, Ron, please! We need to find Luke and get out of here, we’ll starve to death otherwise!”

But Ron had been sitting all the time and didn’t seem to have any will to help.

Then Tom had an idea.

“You said ‘Room of Wishes’? Does it mean I can wish for something, here?”

But Ron didn’t answer. He seemed careless, not interested in the whole situation as if it was nothing new for him

So Tom tried to imagine some bread and water, and they suddenly appeared in front of him. He looked at them, amazed. At least, he thought, they were not going to starve.

For a moment he looked at the bread, pensive.

“Ha!” He exclaimed to himself, then concentrated on his friend Luke: he wanted him to appear in that garden. And magically, Luke appeared just a couple of steps away. Something was wrong, though: he was lying on the ground, motionless.

“He’s probably dead by now, or he’ll soon be,” Ron said. His calm, resigned tone was beginning to get on Tom’s nerve.

“Don’t say bullshit! Luke can’t die that easily,” and he ran to him, knelt to his side, lay his head on his chest and checked on his heartbeat.

“He’s alive! But we need to get out of here soon.”

For a moment, he wondered how Luke had been able to enter that place, then the thought faded away as he hurried to bring him some water. But Luke wasn’t able to drink anymore.

But this time, nothing happened.

He concentrated again, trying to find another way to get out. And still, his wishes produced no result.

“Why isn’t this working?” Tom shouted as teardrops began filling his eyes.

This time Ron spoke on his own initiative; that itself showed something was wrong. His tone seemed irritated.

“This is the Room of Wishes, but its real name is the Room of Ungranted Wishes. It eats your greed, it east your need for wishes, especially the one it can’t grant.”

“How… how can you know this?” Tom looked at his guide and, for the first time, he felt scared by him.

“My real name isn’t Ron. I’m not fifteen year’s old. I’ve been living in this mansion for centuries and I’m nothing but a servant of this place. The Room is not greedy: it doesn’t need to be fed often; a child every couple of years is a good price to pay to ensure the mansion’s prosperity.”

Ron stood up. Strangely he appeared taller and wider than ever.

“Luke was going to be enough for years. But you decided to interfere and, well, the Room will not complain about an unplanned lunch. I cannot release you now, you’ll have to die here, together with your friend.”

Tom fell to his knees.

“I… I thought we were friends.”

“You were nothing but a possible meal for her.”

“And yet, all those times you played with me, all those-“

“I know, I know. I should not play with the meal, right?”

His grin had something evil in it. Tom lost his will to fight, and his need for answers.

“Don’t worry, I’ll have to stay here until you die. And you can try to find a way out, whilst.”

Tom knew he had to try and knew that trying was exactly what the Room wanted. But couldn’t hold back.

Something that Ron had said, though, seemed off. Why should he have to be there until he died? There was no reason he could think of, apart from one: he needed to be there.

He stood up; a new determination was driving him. He reached the small scrapyard at the centre of the garden and found what he was looking for, then hid it inside his sleeve before getting back to him, the one he had once thought to be a friend.

He hugged him, but the boy that was used to answer his hugs was now rigid and cold as a rock; emotionless.

“I didn’t need the Room of Wishes to wish for us to be friends. I did it every day, and I had thought my wish had been already granted.”

Tears blurred his sight once again.

His movement was swift and precise. The knife slid out of his sleeve, into his hand, and pierced Ron’s back, sliding deep inside his meat, between his ribs.

One stab, another stab, another one again. The blade violated Ron’s body repeatedly until he fell down, his eyes still open, waiting only for the last hint of life to leave him.

“If you have to be here, you must be the one preventing me to wish to go away. Was that what you’ve been wishing all this time?”

Ron didn’t speak anymore. For a moment, Tom saw in his dying eyes the same proud, friendly expression he had worn all the time in their peaceful days at the mansion. He couldn’t say if it was fake, though.

But he was dead for sure.

Because there, just a couple of meters away from them, a door had appeared.

Ron was standing in a room of the mansion, looking outside, at the gardens. Once dead, he had simply vanished from the fake reality of the Room of Wishes.

It was no surprise to him:  he had known what to do all along, in such a situation. Just a moment before disappearing from the reality of the columns gardens, he’d wished for any door Tom was going to wish for, to lead to another, different garden.

He smiled, remembering when Tom had been taken to the orphanage a couple of months before after his mom and dad had died in a car accident. It had been fun to see him grow, It would be nice to watch over him for some time more.

He gazed down on the mansion’s gardens: the children were playing and – among them – Tom and Luke seemed as happy as they had ever been.

They were playing with their parents.

No door was visible around them, and Ron desired for that door to never appear again.