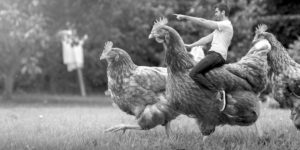 Brandon would have never thought to be in such a situation, a couple of hours before.

When his friend Taryn had called him proposing a game of Chicken Fight, he had definitely thought he was joking. They hadn’t played that game since middle school, they were too old for that.

He had thought of some strange joke. To be precise, his friend had referred to it as Cock Fight, and Brandon had imagined something sexual could be involved in the joke: It would’ve not been the first time Taryn had invited him for afternoons of sex with some if his girlfriends. So, looking forward to some special afternoon, he had decided to pay a visit to his friend.

And now there he was, riding a feathery creature, ready to Chicken Fight. Literally.

Taryn was a rich guy, heir of a group that his father had created from scratch using the knowledge he had gained on genetically mutated animals. His father was a world-recognized genius, but his yet-to-be-acknowledged son was not second to him.

Yet, he was still using his knowledge mainly for showing off with girls, or simply for strange experiments. That was the case of that day. He had probably spent months, or even years, trying to achieve that result, and all to be the first playing a game no one had ever played. Taryn was not only a genius, he was also the stubborn living being on Earth.

“You’ll lead the chickens, I’ll lead the cocks,” Taryn said, commanding his dogs to push the males on a side of the vast plain enclosed in a shallow valley, and the females on the other.

“Why should I ride the chickens? Cocks are stronger!” Brandon complained. Indeed, he thought, it was going to be a massacre if they didn’t mix up the teams.

“We would not recognize the teams. And you like cocks so much, so you can enjoy looking at them as we fight, aren’t you happy?”

His jokes about Brandon’s bi-tendencies were always in between playful and caustic. But he didn’t mind. Taryn was, indeed, his best friend, and he loved him as he was.

Brandon jumped on the animal and felt its feathers caressing his legs. Strangely, the huge creature was calm, as if it had been trained to be ridden by humans. His legs wobbled a little, though, and Brandon wondered if it would have been able to run while supporting him.

He looked around. The chickens had positioned themselves in a V formation, of which he was in the lead. They had been trained for long, he was sure of it now. How much effort wasted on a single, silly game? And yet his admiration for Taryn was bottomless as always.

Their clucking became deafening, as the hens lowered their heads ready to fight. He looked at the cocks on the other sides: Taryn was fiercely riding the biggest, scariest one, at the top of the group. And as always, he seemed unconcerned of the perils of such situations.

Gigantic cocks and hens fighting each other, as they rode them? No problem: that was his daily bread, the ration of adrenaline he needed to withstand the boring days.

Brandon felt a chill down his spine, as he met his friend’s eyes and saw fire burning in them.

And then their battle cry resounded in the valley.