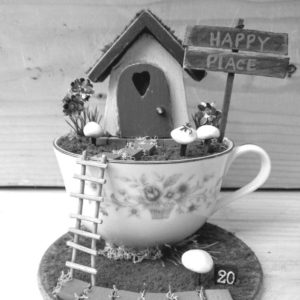 “There’s no thing as a Happy Place!” Page the cottage shouted in the direction of Gunter the ladder.

“For ze Hundrez time, me tellen you zere is, und vee life in it!” he pointed out, with his typical German accent.

“You’re telling me this God-forsaken little cup is a happy place? The Happy Place? You must be kidding me!”

Every day the old, same story. Gunter was getting angry.

“I see just two bars of bad-mannered wood, there, nothing else.” Page said, and be sure she would have reddened with rage if only she could have.

“Zat’s bekause you looken at zat from behind, kome heer!”

“If I fucking could! I’m stuck, they must have used too much glue to stick me to the synthetic grass!”

They both yelled, exasperated. And strangely enough, Gunter the ladder had no accent.

Flo had always thought he was just faking it, anyway. There was no way he was really German. Actually, she had always suspected they were all Chinese.

Having no eyes nor skin, and having learnt how to speak by–

Wait, not even the author knows! How the fuck are they supposed to have learnt to speak, and how can I explain one speaks with German accent? The author bangs his head on the desk. “Ouch, pay attention! You hurt me!” complains the wooden furniture.

-by… I was saying… God’s will? So yes they had learnt how to speak by some unspecified god’s will and the so-called god had forgotten to give that gift to Gunter and so another god had had to finish the job and had messed up.

Flo the flower waited until the author had finished his blabbering, then continued.

“I can’t see the sign, but maybe we can ask Pricks the bricks. As a multi-self entity, it should be able to-“

“Don’t you ever use it with us again, you fag!” Pricks complained, “You call us we, and pay us the due respect!”

“Yeah, as if I should… people use to step over you!” Flo murmured, but she didn’t want to flame the already touchy bricks.

“I mean you as plural… what the hell is with the author? Couldn’t he use some less confusing language?”

“Wait, wait,” Flo the flower complained, interrupting the flow at the muse that was probably going to make that into a best-seller, “We don’t even understand what we are saying, now! Get back to English and make the bricks less hard headed.”

“Ha. Ha.” Pricks boringly laughed, as the others objects heartfully did at the nonsense joke. And yet the author agreed.

“So what about the sign? Can you read anything?” Flo urged them.

The electricity in the air was palpable as they all carefully listened to what Pricks had to say.

Flo the flower was the first to realise where the issue lay.

“W… who the heck glued you upside-down?”

And as soon as they knew the issue, Pricks found the solution.

“Ah, I used the wrong self-brick to read. That would make it… ‘Happy, place’!”

“Ah ah! See it, Gunter and Page? No way would the bricks lie!”

“Why shouldn’t they lie? I know all of you conspire against me!” Page hissed.

Gunter the ladder looked at him, speechless, and so Flo and Pricks. Why did the author decide to put them in the same cup of a conspiracy theorist?

“Hey, we are speaking with you! How the heck did you imagine the dialogue between a conspiracy theorist Cottage and a German speaking ladder in the first place?”

The author looked at himself. And didn’t know how to answer, actually. How the heck did he imagine all of that?

Then he looked down at Happy Place he had made inside that cup long before, as some kind of inspiration project on his high-school days. And looking at all the characters, he realized there was only a plausible reason for that happening.

The mushrooms were giggling motionless, strangely quiet, enjoying the scene as it developed.