Becoming an Author – About Motivation

Home / Becoming an Author – About Motivation

Becoming an Author – About Motivation

I wrote a little about motivation, a couple of days ago, but that is a topic that itself could cover (and actually does!) hundreds of books. And I have something to add, at least regarding my own experience.

I wrote about my “Leaving a Legacy” motivation. This all starts from the way I measure success, indeed.

Someone once asked me “Do you consider yourself successful?”, and when I answered with a straight “No”, this person was very surprised.

Fact is, I think being successful is not something you can judge for youself, it’s something the others will. And to me, someone is successful when he/she manages to have a strong impact on the others, especially people who doesn’t even know.

I have a nice family, but it doesn’t mean I feel successful.

I have a good job, but it doesn’t mean I feel successful.

I’m happy, but it doesn’t mean I feel successful.

Being successful is not an intrinsic characteristic of someone, but a label the others put on you. And when you are successful, you automatically leave a legacy. You’ll live, for some time, even after your dead.

Dante lives in every frustrated italian scholar. Joyce, probably, in every Irish one forced to read it.

“Leaving a Legacy” is my future, it is what motivates me to do what I do. But among the things that mostly motivate me, there is also one from the past, and that is:

I need, I want to finish the things I start. I have a huge dedication problem, because I like to do too many different things at once. And I have a vivid imagination, that means I have ideas for new books and tales almost daily. In the ocean of ideas, choosing the one to dedicate myself to is not a simple matter for me, and I would totally end up dedicating my time to all of them, without ever finishing one.

I still remember that time – almost 25 year ago – when my Computer Science teacher, after I couldn’t finish an optional project I had promised to finish in the week, told me these words:

“You, Max, you never finish anything.”

It’s incredible how big of an impact a single sentence said by someone you trust, someone you look up to, can have on your entire life.

I think about those words since then. Almost every day.

Those are the words that motivate me to finish what I begin.

Now think about it: what really motivates you, to the core? 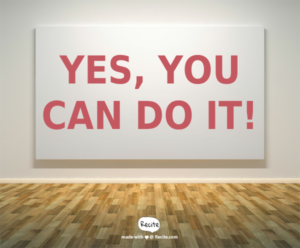