This is the first post of a new series that I’ll try to keep “alive” in the future: “The Author Speaks”. What I’ll share here are insights about my writing style, my characters, problems to solve, plots and so on.

The Main Characters of Unbreakable Curse

Today we’ll begin with a little knowledge about Ed and Maggie – Edward and Margaret – the main characters of the long story I’m currently writing: Unbreakable Curse.

The story is probably the longest I wrote on this blog, up till now; as such, it requires a little more “3D” (as would my editor say) characters. They must be more complex than usual, and their behaviours and overall character must make sense in the story and match with the events. Not an easy feat to achieve.

Ed is a lonely man, disappointed by the things life brought him so far. He lives alone, doesn’t like social life too much either. He’s old enough to live alone, and even if his parents live just a couple of minutes away, the apartment he rented in the old building is what he feels like “home”.

As every healthy man he has a woman he likes, a woman that is the target of his sex drive: Rose. We’ll never know anything specific about her, if not Ed’s subjective, idealized image. Even if he thinks he loves her, though, she is only the relief valve of his urges, nothing more.

He’ll realize it eventually, when he meets with Maggie and is forced to learn how to interact with someone. I still don’t know exactly how (no author knows, until he put the words “the end” on his story), but I’m sure he does, already

She is a ghost, and it’s been very fun to depict her, so far, because I actually know nothing about ghosts (who does?). In the beginning I imagine her living in our dimension, as a spirit. But the more the time passes, the more I think she lives in her own dimension, where she is the only real thing, while the rest of our world is a transparent mess.  She sees Ed as Ed sees her.

To me, this makes her even lonelier than I though she was, when I began writing about her.

The fact she doesn’t remember anything about her past as a human, means she had been a blank sheet for all her time as a ghost, absorbing anything coming from our world, without actually wondering what was good or not.

As Ed, she has still surprises for me. For instance, there is this thing bugging me about her: when Maggie speaks to Ed the first time, in Part 1, she says “How… utterly disgusting” and “So… gross!”.

Well, I may be able to correct/change this in editing phase of the story. She may, for instance, have said those two lines only because she had heard them from some previous tenant of the mansion. Still, this is a good example of what I thought when I created Maggie. 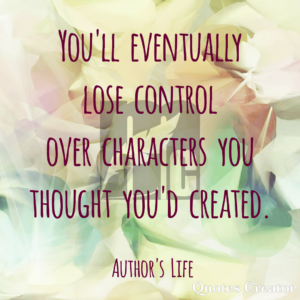 What about the other characters? Who is Mrs Turner? Who’s going to appear in the next chapters? Follow me here or on wattpad, and discover it!