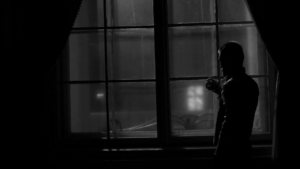 The old wooden gate leading to the courtyard felt heavier than usual that evening, and as he pushed it, Edward realized he was very tired.

He opened it just enough for his body to slide between the doors but miscalculated. The heavy door bounced back too soon and hit his ankle.

“OUCH!” He screamed, and before the pain hit him in full force he managed to kick the door with anger, “Fucking door! Fucking, FUCKING DOOR!”

When he saw the shadow behind him, it was too late to stop. He turned around as if nothing had happened, wore a nice smile and, with nonchalance, he walked away pretending his leg was fine.

The old woman was not used treating people gently. Always grumpy, always complaining about any little matter. Edward didn’t like her and as such, had always tried to maintain a safe distance from her.

“You better not ruin the door, boy, or I’ll add the fee to your rent!” she yelled at his back.

Yes, she was the owner of the building, or at least the person in charge of managing it. That was why he couldn’t really get angry with her. Moreover, in this case – even if it hurt him to admit it – she was actually right.

Edward didn’t answer, though; he was already far on the other side of the yard, hobbling on the old, rock stairs that lead to the second wall of the wing where his small apartment was situated.

The old door screeched as he pushed it open, and when he closed it back too.

“Good! As always, everyone knows I’m home, now,” he thought.

He took off his shoes and coat, cleaning it from the occasional snowflakes that were still lying on his shoulders, and went straight to the kitchen. He switched on the kettle and looked down the window in the yard. The old woman was still there, using a threadbare broom to remove the last red and yellow leaves that had fallen on the ground.

From that position, it was even clearer to him that the entire construction was very old. He couldn’t date it, but it looked more than a century old, already. Doors and windows had been ruined by the elements so much that you could barely see the white paint on them. A floor below him, on the right side of the yard, an apartment had them re-painted in brown, but even if they looked new, the colour felt like a punch in the eyes.

The noise of the boiling water brought him back to his senses. He brewed himself a tea, added some milk and just the tip of a spoon of honey, before taking the cup with him to his room.

Those four walls were his favourite place in his small apartment. That room, at least, was in a corner of the building, and that provided him with a little extra privacy, in case he had ever needed it.

The harsh reality was, he rarely needed it. He had been single for long and he had no luck with women either. He had never thought to be ugly, actually, but there was something in his attitude to the other sex that had changed, in the past years, in what seemed to be the wrong direction.

Looking at himself in the mirror he could see the results in front of him. The Ed he saw was not the man he used to be years before. He was only 25, and yet surrounded by a melancholic, sorrowful aura. His eyes had lost the happiness, the lightheartedness he once had.

No girl liked that, in a man, and especially not that girl, the one he liked.

Rose was a colleague just a little older than him. While he lived in a small town in the countryside, she was from the big city and, as such, they hadn’t known each other before meeting at their workplace. From the very first moment he had seen her, he has felt attracted to her. It wasn’t love, he knew that; it couldn’t be. He didn’t know her that well.

But her movements, her voice tone when they occasionally met and spoke at the office coffee machine, the way she waved her body when she walked and the way she openly spoke with everybody, had a strange effect on him. He hadn’t felt those feelings for a girl since long, it was a nice change.

Ultimately, that was the reason why he had been stuck to that job for the past year. He hated that job, he hated that place. Working as a junior in a law firm had its advantages, but not in that particular one. It was getting on his nerves. The atmosphere was ill, most of the people were talking behind others’ back in desperate attempts to move up in their careers. That wasn’t the place for him, not if he wanted to chase his dream: he wanted to travel, he wanted to open his own law firm, to help people in need.

Yet, even if he had long realized it wasn’t for him, he was lingering in that company hoping for a chance that wasn’t going to come. Ever.

He lay on the bed but kept his eyes open. The ankle still hurt a little, but relieving it from the burden of his body weight had improved the situation. Outside, the darkness was quickly engulfing everything, and the dark blue shade that faintly illuminated his room calmed down the anger that was slowly taking the place of his sadness.

After a couple of minutes the blue shadows disappeared, leaving him in utter darkness. His thoughts drifted to the girl he liked and he started fantasizing about her. She had such nice lips: slightly protruding forward, enhancing the small black mole she had between them and her nose, those kind of lips he dreamt of kissing every time she spoke with him. And if it was only for those, it wouldn’t be a problem, he thought: looking at the interlocutor’s lips it’s maybe not completely normal, but not impolite either.

The problem was with her breasts. Rose had huge breasts and she seemed to have no intention of hiding it. Being it summer or winter, she always wore low cut V-neck shirts and sweaters that seemed made to enhance her cleavage. His sight getting continuously drawn by that sexy valley when they spoke, was indeed a problem. Being caught staring at her tits: that, would have been rude.

At the thought of her lips and breast – like almost every evening in the past months – he felt a known twitch between his legs, and a special warmth spreading form his stomach, and below. He took off his trousers, and from that on, his fantasy travelled fast.

There was Rose, asking him to stay overtime at the office to help him with some papers, but when he entered her office there was no paperwork around. Only her, sitting on the desk, the moon filtering from the window at her back cuddling her shapes.

Ed’s hand slid down his stomach, he was hard already. He slid his boxers down, grabbed his cock and began to caress its length.

And again Rose was there in his fantasies, welcoming him with a naughty smile and an unbuttoned shirt; her braless tits pointing their hard nipples at him. She took one of his hand and placed it over her breast.

“Do you feel my heart, beating so fast?” She asked.

For a moment even Edward thought that was too cheesy of a line, even for a fantasy. But again his cock was so hard at the thought, it almost ached. He began stroking it, up and down, up and down. Naughty images of her lips and her breast, of Rose getting nude and offering him her services followed one after the other.

He started. The muffled voice wasn’t part of his fantasy. It was low, as if it came from afar, in front of his bed. He hurried to turn on the lampshade, scared.

“I’m so stupid,” he said out loud, as to mock his own fear, then lay on the bed again.

It took a while for his thoughts to drift back to Rose. His cock became hard again and, as he lay on the bed, his hand began to move on it.

Her tongue licking its tip and sliding down his shaft, all the way to his balls. Her soft lips caressing them, sucking on them, and then the way she sexily looked at him as she blown his cock. Everything was getting him to the edge again.

As he had done at times, when he was overly excited, he had actually spoken. But that room in the corner of the building provided him with a safe place, he knew that. He liked to think everything was real, he liked to act as if everything was happening and the girl was there, with him, on his bed.

That voice again, this time it was closer, coming from his left. The light was already on, and the only thing there, was his window, facing on the outside road. He stood up and looked outside: the road was two floors below, too far for anyone to see him. On the other side of the road, only open fields.

Fear seized him again. He felt a shiver down his spine, goose bumps running through his back and arms, and an indescribable need to get away from there.

And so he ran away.

That night Ed slept at his parent’s place. They lived in a city nearby, they were happy to have him there for the night, for a change.

And yet, as he tried to sleep, the only thing he could think of was that voice, hissing from the side of his bed.