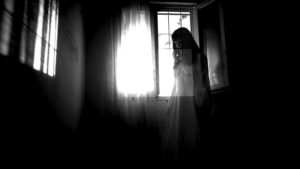 As always, he was among the first to arrive at the office. Waiting for him, on his desk, tons of paperwork he would have had to manage throughout the day. Sometimes, it seemed he was the one in charge of the most clients, and yet nobody was acknowledging his hard work.

Like every day in the recent months, by the evening he was feeling very nervous and frustrated. But at least, his problems at work had had him forgetting about his problems at home, for most of the day.

Coming back home after work, though, wasn’t the easiest thing to do. This time the wooden gate felt heavy with fear and uncertainty, not tiredness. But Mrs Turner wasn’t there to scold him, so he felt free to shut the gate with a loud bang, in a sort of way to dispel his nervousness.

He knew it wasn’t the gate’s fault, though, and a strange feeling quickly took possession of him again as he climbed the stairs, inserted the key in his apartment’s door and opened it a crack.

He looked inside, nothing felt off so he pushed the door open and entered.

It took him a couple of minutes to tentatively tour his flat checking everything was exactly as it had been left the night before. When he finished, finally, he felt home. Then, with the calmness, came the realization he had worried about nothing.

“I’m stupid. That must have been some stress… I’m imagining things, am I not?” he said out loud switching on the kettle in the kitchen. Below him, out of the window, he could see the yard barely illuminated by the evening light. He had come home later than usual, he thought.

He cooked for himself a frugal dinner using leftovers from the day before, then decided to relax. He undressed and headed to the bathroom. He really, really needed a relaxing bath.

The hot water soon filled the tub and once he immersed his body all the worries from the outside world disappeared. He forgot about his job, he forgot about the voice, about his plain life.

He didn’t forget about the girl he liked, though. Rose was always in his mind and he didn’t seem to be able to stop thinking about her. And as with every evening, his hand slid under the water and met with his growing excitement.

Images of Rose bending on her desk at work, lifting her skirt and begging him to fuck her. Images of his cock sliding in and out of her pussy, his hand grabbing her hips, pulling them to him to shove his cock deep into her; of his fingers teasing the tiny little rosebud just above the hole he was fucking.

He stopped, pulled the plug out and let the water drain while he rinsed his body. Edward felt still needy; he knew he had to finish himself off, but he liked to take it easy. Nobody was going to deprive him of his pleasure, he had no need to hurry.

Once in his room, he stared at the library that occupied almost the entirety of one of the wall, deciding what to read. It was filled with comics and books of every genre. Many of them had never been read, some had been left half-way through.

He took one of those – since he thought he remembered the point where he’d stopped reading it – and threw himself on the bed.

After a couple of minutes, he was already fully immersed in the story: a group of people had met at the top of a building by chance, during New Year’s Eve. All of them wanted to commit suicide but none of them actually did. Up to the point he’d reached, they had become friends. A girl and a boy that had met on that roof were now probably going to become a couple. The book was filled with sexual tension in the current chapter and even if something concrete had yet to happen, the orgasm he had just interrupted had left him in a very sensitive state, and he got hard again with just that little.

But as he slid a hand toward his growing sex, he heard it again.

This time the fear didn’t strike him suddenly, because the voice wasn’t angry, hissing like the day before. He knew that sound, he was accustomed to it. It was the calm, sorrowful voice of someone who desperately needs help. It was his own voice, and yet it was someone else’s.

He just froze for a moment, trying to understand where the voice had come from, then looked around. If he was getting crazy, if he had started seeing things, that would have been a problem, indeed. But answering to that voice would do no harm: in the worst case, he would have simply talked to himself again. That would not have been the first time.

And the void became a faint, white shadow, at the end of the bed in front of him.

Then, to his utter surprise, the void answered.

“I’m Margaret, I didn’t want to… Frighten you,” the girl’s voice continued.

“Where are you? I… I can hear your voice, but I can’t see you… Properly. Are you what I think you are? Are you a… Ghost?”

Ed really thought he was getting insane. Was he really talking to the air?

“I’ve been living here for a long time and nobody has ever heard me. I observed generations, I observed people come into this world, growing and leaving it. And yet you are the first one to hear me like this, in centuries.”

If that was all fruit of his imagination, he was very good at it.

“I do hear you. I can’t see you though… are you really a ghost? Are you… this white shadow I can see in front of me?”

The blurry white shape floated to the left side of the bed, and from there the answer came.

Ed didn’t start, he had expected the change in position.

“It seems I can… Somehow see you. Do you mean to harm me?”

Yet he thought it was something silly to ask, just after he had pronounced it. If the ghost had had bad intentions, it would have probably carried them out already. There would have been no reason for it to introduce itself.

“I never harmed anyone,” was the somewhat cryptic answer. That didn’t mean it would never hurt him, he thought.

“Turn off the light if you want to see me better; I can maintain a better form in the darkness.”

Edward turned off the light and the room became pitch black. Only a faint moonlight filtered through the curtains, and his eyes took a while to adapt. When he was finally able to see properly, he began discerning the figure of a woman.

She was standing – or better floating – on the side of his bed. Her body was transparent, but a silver line defined her silhouette: she was short, thin, with long hair that fell way past her shoulders, some on the back and some on the front. She was wearing only a white nightgown, or such it seemed. Her face was now clearly visible and she was looking at him with what seemed to be dark eyes. Ed thought she may have been in her twenties. Margaret was an interesting girl: a pretty, petite ghost.

“I do, and now that I can I’m not scared anymore,” he said smiling at her.

“I was still alive, the last time I spoke like this with someone, but I have almost no memories of that time. Since I’m like this, nobody has ever been able to hear or see me.”

“This… This is weird. I can’t be really seeing a ghost, right? I mean…Why me, Edward Morrison?”

He realized he had yet to introduce himself, but the girl had stopped talking and she was waving her body left and right as if she was lost in her thoughts.

“I don’t know. I tried more than once to speak with the guests of this house, but apart from some occasionally frightened people, I never got any response.”

Silence fell between them. Edward didn’t know what to say: she stayed there, floating, looking at him as if it was the most natural thing in the world.

Suddenly, as he looked at her, he felt a known movement between his legs and realized he had a problem. He was still completely naked, and even if the nightgown she was wearing wasn’t particularly sexy, it was enough for him to imagine more, and his excitement grow.

The ghost was, in any case, a girl. And a pretty one, probably just a little younger than him, if he didn’t count the years she’d been stuck in this world in that form.

That said, it wasn’t polite nor normal to show himself to a girl like that. He needed to finish himself off, and then… Then he would think about other matters clearheadedly.

“Sorry, could you give me a minute, I have to… I need to do something,” he said. Then stood up, fetched the lower part of his pyjama from under the pillow to cover his nudity and left the room.

“I have all the time you need,” she giggled. That felt like her first joke, in a long time.

The toilet was small, cramped, but he didn’t need more than that. Only two minutes alone, to get rid of the excitement that was trapping his thoughts.

He grabbed his cock and, after a couple of strokes, it was already hard in his hand.

His voice was not more than a whisper, but the one that came from above him wasn’t.

“First in the bathtub, and now, here?”