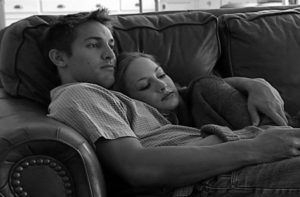 Susan lived in a town nearby and it took no more than twenty minutes to get there.

When the GPS notified their arrival, they were in an area composed mostly of small, two-storey, colourful townhouses. Her one seemed to be a shade of orange but Leon wondered if it wasn’t actually pink. The low, warm yellow lamps on the street – the only source of illumination around – could be playing tricks to his vision as had happened at the Big See that night already. A green front yard separated the entire strip of townhouses from the street. Each house had its own decorations: trees, bushes, flowers. Susan’s one had two lines of roses adorning the sides of the path leading to the door.

“It’s here, right?” He said turning to Susan, and only then he realized she had fallen deeply asleep. Indeed, it was long since he had retracted his hand from her naked leg, and there had been no word between them since.

“Hey, Susan?” He tried again, poking at her shoulder, but got no response. He sighed, wondering how he was supposed to wake her up.

“Suuuusaaaaan…” He tried again, raising his voice. And again, he got no answer.

He needed to snap, he needed to get rid of some stress. While his two friends were supposedly somewhere fucking two – if not nice at least pretty – girls, he was stuck with the drunk one, now sleeping like a log in her car.

He exited the car, closed the door behind his back and swore again, this time shouting his frustration to the moon.

The chilly air helped him to relax, anyway. He lighted up a cigarette and leant on the car, pensive, as his previously racing heart calmed down. He knew himself pretty well: there was no way he could have left that girl in the car all night. He had to wake her up or, at the very least, to manage to get her home.

First, he covered the few meters that separated the sidewalk from the door and rang the bell.

No answer. Indeed, excluding the lights on the porch, the house was pitch black, as if nobody was there. But as it was late night, it may have been that everyone else was sleeping.

He tried to ring again, and again.

The more the time passed, the more he realized he had only two options: staying for the rest of the night in the car with her, or try to pull her inside, somehow. The latter seemed the most attractive, especially due to the cold that was, by then, gripping his bones.

He entered the car and, inside, looked for her bag until he found it, then – even if he knew it wasn’t something a man would be supposed to do – he rummaged inside until he found what seemed to be the keys to her door. He went all the way to the porch again, unlocked and opened the door a crack before coming back to the car and opening the passenger’s door.

Only when he pulled her up and outside, she woke up as much to be able to stand – if hugging him and half sleeping on his shoulder can be considered standing, indeed.

Like that, he managed to drag her all the way to her house and inside. When he closed the door behind them, he took some time to touch the wall in search for the light switch. When he finally found it and turned on the light, he was happy to see he had switched on only a low, dim light, that wasn’t hurting his eyes too much.

The first thing he saw, was his objective: the sofa. In was on the left of a wide room that spanned across almost the entire ground floor. On the right a red kitchen, a glass table and a door that probably led to a bathroom or little warehouse. On the right, the sofa was placed in front of a TV stool on the side of which there was a little, brick fireplace.

Apart from two little, tiled squares around the entrance and the fireplace, the rest of the house floor was in some dark, shade of wood. In front of him, on the other side of the room, wooden stairs led to the first floor where – he thought – he had no intention to go.

Leon dragged her all the way to the L-shaped sofa and laid her onto it. Susan, though, seemed to have no intention of removing her arms from around his neck. As such, as he lowered his head to completely lay her on the sofa, he found himself unable to keep balance and fell over her.

It felt, actually, more as if she had purposely dragged him down to her. He barely managed, with all his will, to rest his elbows on the side of her head not to squish her with his full body weight.

For a moment, he became overly conscious of her body. Her soft breasts were firmly pressed against his chest, her skirt had shifted so high that his leg between hers touched only naked, smooth skin. And even if he couldn’t say he liked that woman, when – still her eyes closed – she grabbed his head and pulled it towards him, he opposed no resistance to her kiss. Their lips met in a sort of dreamy déjà-vu, their tongues swirled together, their kisses became passionate as her hands that quickly roamed down between their bodies to grab his already hard manhood.

Leon, indeed, was a man. He had gotten excited, more by the situation itself – home alone in the house of a lightly dressed girl he used to know – than by the girl itself, though. As she was now, she had nothing but the mere passion of a drunk girl to give him, and he wasn’t the kind of man to take advantage of the situation.

It was difficult, yes, but he managed to push her back, to interrupt their kiss, to grab her hands and put them aside before he reached the point of non-return.

By her face, he could see she was disappointed. But it didn’t last long: as if everything had been only a dream for her, she lay back on the sofa and her expression relaxed once more.

Leon sat on the side of the L shape and tried to catch his breath. Susan, now, looked asleep again. He took out his phone and called the taxi company, decided to leave.

Leon startled when he felt a hand touching his leg, and turned to face Susan. She was lying on the side now and her eyes were open. She was definitely aware of him, and more than drunk her voice just sounded deeply asleep, now.

“Sorry, could you wait in line for a moment?” He said on the phone, then covered the microphone with a hand and looked at Susan.

He looked relieved. She was indeed asking him, Leon, and the problem was that, being that the case, he had no reason to say no to an old friend. She may have needed him during the night, moreover, so in the end, he decided to stay there.

“Sorry for having you wait, please cancel my reservation for now. I’ll call again in the morning, thanks.”

He hung up the call and looked at Susan. She had closed her eyes again, but she was faintly smiling and she had made some space for him to sit at her side, with his legs stretched on the protuberance forming the L shape of the sofa.

The night had been long and tiring for both. Leon lay there by her side and soon fell asleep, too.