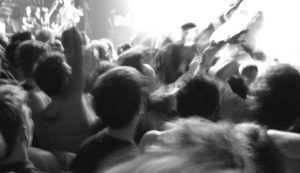 But there was an exception to the rule: concerts. In his life, Leon had spent more time on a guitar than on anything else. He loved music and he was well aware of the appeal that live music had on him. Every time he went to a concert, he could feel again all those lost emotions from the time when he was the one on the stage, playing the guitar and singing with his former rock band.

That’s why his friends had never problems convincing him to tag along with them and as such, that night, he had tagged along again. He had felt a little uncomfortable on the line to buy the tickets, but once inside the club he had soon felt at home.

The Base Club had been built a couple of years before in the basement of a historical building in the centre of the small city. It was not too big, but it has quickly become renown in the city for the strict selection required to play on that stage. Only Indie groups working for small, local labels were allowed to play there, and as soon as they became famous their chances to play in the “Big See”, as everyone was referring to the club, were nil.

That night it was the turn of a band that had been slowly but steadily growing in the heart of citizens: The Crest and Beyond. As a matter of facts, an acquaintance of him was playing as the drummer of the band and Leon was curious to listen to his performance.

As interested as he was in the band and music, his friends weren’t. Tim and Sean were looking around for girls, as they always did in such situations, not caring about the music that for them, was just accessory. They knew already most of the girls in the city, but they were always trying to hit on the few, new ones coming from nearby towns, and they had no time to lose: as soon as the concert started, they would have had no easy chance to speak with anybody.

Not that Leon wasn’t interested in girls: he was a healthy man in his early forties, and had been single for way too long. But to meet the right woman when the choice in the city was so limited, seemed to be an insurmountable obstacle.

He went to the bar and bought a drink. Holding and sipping a glass of Vodka Lemon while looking at the goods on sale at the band kiosk was always a good way to pass the time before a concert. He looked at all the items on sale: their new EP, cups, wallets with the logo of the band: a stylized, split wave crest with something that could be a sun, or a star, half hidden behind. There was even men and women underwear with the logo in the front and the back, something he thought was really kitsch.

At least the t-shirts were pretty, though, and seemed to be well made: the logo had been carved in the middle of the chest, using some black-transparent synthetic fabric to stick out from the t-shirt black cotton. The two girls selling the goods were actually wearing those t-shirts over a white, low-cut singlet, and the effect was quite nice, especially for the boys who could have a glimpse of their prominent breasts, he thought.

Suddenly, the lights faded out and the attention was caught by the illuminated stage. He left the glass on a table and walked to get closer to the stage. As always, he had bought nothing – he thought.

There was no trace of Tim and Sean. Either they had gotten lucky with some girl or, more likely, they were somewhere getting drunk: they were really not interested in the music as much as Leon was.

The concert started: the band sounded good. Notes and chords filled the atmosphere with joy; the drums had a good vibe and the singer was clearly the leader of the group: the timbre of his voice was strange enough to sound characteristic and his movements good enough for the crowd to feel involved.

Leon didn’t know any particular song but one – their most famous – and when the band started playing it, the whole crowd began to dance and jump as they sang the refrain over and over.

He didn’t like to be in the crowd, but the atmosphere was so nice that he simply became part of it. Everyone was dancing, moshing without caring about hitting each other. He hadn’t drunk so much, but still, his head was spinning with excitement.

And as he threw his head back and forth, as he moshed in the crowd hitting all those strangers that were, in that moment, connected to him by the music, he lifted his head and their eyes met from afar, for a brief moment.

She was crazily moshing. She was sweat, hot and beautiful.

And as he shyly looked away he remembered a name: Susan.