In All Possible Ways – Part 7

In All Possible Ways – Part 7 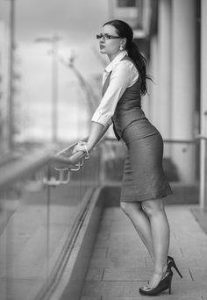 The following week, Dana didn’t have to wait for Friday to get the usual message. Monday evening, as soon as she reached home and opened her bag, she found another small envelope identical to the one she had gotten the first time. She was surprised by it, because she had thought their only communication means had become the smartphone, and she was evidently wrong. That man never stopped to surprise her.

The date was for the next evening. She had already planned a dinner with her friends though, what to do? She weighted the options. She could have cancelled the night out with the girls. They would have gotten very curious, but she had ways to keep them at bay. On the other hand, she was in the middle of her game with him, and desperately wanting to be fucked. Stopping the inertia they had accumulated, could backfire on her. That’s why she decided not to complain to him, not even to ask for a postponing. She was his doll, and as such, she was still at his complete disposal. Until the moment she’d pronounced the safeword, of course.

The next evening she decided to tease him a little. She wore a white shirt, grey skirt and blouse, stockings and high heels, and gave the finishing touch with a pair of fake glasses she had once bought to dress up for a carnival show. She tied her hair in a ponytail and wore high heels, before applying red lipstick and a little more makeup than usual

Looking at her reflection in the mirror, though, she decided that was dressing too sexy to roam in public, and as such before leaving her apartment she covered with a long duster jacket. No neighbour would have thought badly of her, that way, in case they’d meet her on the way out.

She arrived at Rick’s apartment a little late. That had never happened before, and she felt a strange sense of uneasiness before ringing his bell. His reactions were unpredictable. As always, when she arrived at his floor, the door was open a crack. Inside, though, it was very dark. Just a faint yellow light coming from afar, and not the usual welcome she’d already gotten accustomed to.

Dana pushed the door and entered the apartment, then closed the door behind her.

And as soon as she turned around again, while she was realising the reason for the faint light was the line of candles on two shelves in the living room, Rick appeared in front of her.

There were no welcome words this time.

Dana didn’t even notice how he had dressed to meet her and later, she would have thougt, even all her dressing up had been almost useless. Because Rick literally jumped on her. He kissed her on the lips and by that first, long and deep kiss, Dana could feel the desire that had grown inside him.

His hands were everywhere. Her duster jacket had fallen on the grown already and he had unbuttoned her blouse and shirt. As his kisses moved from her mouth to her chin and down on the hollow of her neck, his hands groped her tits and squeezed and fondled them, pulling them out of her bra to be able – she knew he liked it already – to eat them out. A moment later, indeed, Rick was eagerly eating and sucking her nipples, teasing them with his tongue and teeth, while Dana grabbed his head and pushed it against her chest to showing him her appreciation, moaning loudly

Everything had been so quick and exciting, that when he pushed her legs apart and pushed his hand up her thighs, when he touched the naked pussy she had purposely left panty-less, even Dana was surprised to feel she was already drenched.

A finger slid inside her, then two, then three; he moved his fingers wisely, teasing her lips, her clit, her holes. But when he felt her orgasm approaching, when her breathing became heavy and her body began to shudder, he stopped.

Those were his first words that evening. And even if, for a moment, she thought he wanted to leave her like that – once again – she knew she couldn’t complain.

But this time Rick had other intentions. He straightened up, kissed her mouth again, with no less passion than a moment before. Nothing had changed, nothing had finished.

Then he took her by her hips and, as he had done some evenings before, he turned her around as if she was a doll. Dana was a fast learner: she let him do and enjoyed the feeling of being commanded, of feeling totally his.

Rick couldn’t see her face, but when he pushed her to the wall, when he lifted her skirt and spread her legs, when he pulled out his cock and looked for his way inside her, during all that time… Dana was amazed. Everything she’d expected, but to be fucked like that, at the entrance of his flat, still wearing her heels and blouse, with a passion usually reserved to a lover you lost and found again, after a long time.

Rick had checked her, he knew Dana was ready, completely wet for him. That’s why he pushed like that: in a single, vigorous thrust, his entire cock was inside her.

Dana’s body was pushed up against the wall. She had to concentrate to find the balance on her heels again, but soon every distraction around else disappeared in bliss.

The subtle light made her more aware of her body like she had been the previous time, with the blindfold. And she had still to see it, but she was now sure that Rick had a fantastic cock. He was reaching deep inside her, he was stretching her pussy rubbing against her inner walls, teasing every centimetre of her skin and muscles. She closed her eyes completely, getting used again to a man inside her. His balls were bouncing on her clit each thrust and his hands on her breast, his fingers teasing her nipples and his lips kissing the back of her neck, helped to fill the void of that missing sense.

This man was adoring her completely, naturally, instinctively, truly. She could feel it from his thrusts, from his kissed, from his touches. And the truth is, the only real thing that Dana wanted was to feel like that.

Her body shuddered under his hits, her legs trembled, her pussy tensed on his cock for a moment, until everything she’d accumulated inside her in the previous months exploded. She tried to lean on the wall as her entire body shook and trembled, as a wonderful orgasm took possession of her body and blacked out her mind.

Rick had disappeared, but this time he was tactful enough to come back with a towel and a glass of water. He caressed her head that was still leaning on the wall, waiting for her to get back in control. Dana kept her eyes closed, enjoying that tender touch. He had never caressed her like that, and it was the only thing she had always needed after an orgasm. This man seemed always able to read her mind.

They didn’t speak, though. And after a while, he simply left as he had done the other times.

Dana knew what that meant. She cleaned her body with the towel, drank the water, wore the duster jacket back and left the apartment.

She was still wobbling a little when she reached her car and had to wait some minutes before she could drive. She looked at the building, up to Rick’s flat.

Now, his lights were on.