In All Possible Ways – Part 6

In All Possible Ways – Part 6 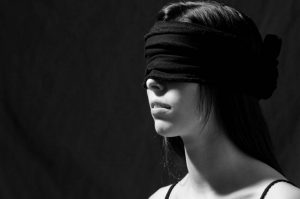 She kept silence, remembering why she was there. Once the blindfold was secured, she waited a couple of seconds in the corridor, alone. Then, without notice, she felt a hand caressing her hair, her neck, then another caressing her cheek and shoulder. It was a light but confident touch and those smooth fingers were giving her the goose bumps. She felt a well-known sensation building up below her stomach, but stayed still, as she thought she had to be.

Dana felt his breath near her face, then near her lips, and still, she kept quiet and still.

Then she felt a slight graze of his lips on her mouth, and still,t she kept quiet and still.

Rick didn’t kiss her, but instead, his lips caressed the corner of her lips first, then moved on her side until they met her earlobe. Again, those goose bumps, as Rick whispered in her ears.

“You are mine tontight. Your mind is mine, your body is mine. You’ll not move it by yourself. You – are – mine.”

Well, she felt his, totally, even before his kisses slid down on her neck, gently biting her skin, and on her shoulders. Her covered eyes helped her concentrating on the other senses: her skin had never been so delicate, her ears so sensitive, her smell so focused on what was happening around her. She imagined that man, by the position of his hands, by the sound of his breath, by the scent of him. In her imagination, she was watching the scene from aside, as the only spectator of a naughty movie.

Now Rick slid her shoulder straps down, and with them, the entire dress fell on the floor. She didn’t feel embarrassment because she couldn’t see his reaction to her nudity. Moreover, his hands now caressing her back, her sides and her stomach; his hands pushing up her breasts, cupping her tits, and feeling her naked skin, gave her the confidence necessary to stay calm. She let him do.

Rick began kissing her breasts, licking her nipples, teasing them with his lips and mouth. Soon, his thumbs found the straps of her thong and slid it down. Dana was now wearing only her silver pendant and sandals, nothing more. She looked at herself in her imagination, and she felt sexy. That man was loving her with his fingers and lips, absolutely adoring her as no man had ever done. Or maybe, that was indeed only her imagination.

She felt her needing nipples getting the deserved attention from his tongue, and his hands caressing her thighs again, sliding up until they touched her. He was checking her wetness, as a master would check the goodness of his merchandise. She felt used, and yet the fact it was a mere physical act detached her enough to be able to enjoy it.

Then, suddenly, she smelled her scent while one of his wet fingers traced her lips. But she didn’t dare to open them until Rick pushed his finger into her mouth.

“Try yourself, and describe it to me.”

Dana sucked his finger. In any case, she had always loved the taste of her own juices, there was nothing strange in doing that, and the fact they were on Rick’s finger now made it even more exciting than usual.

It wasn’t the usual Dana, speaking, but she had indeed concentrated so much on her own taste and smell that had lost, for a brief moment, all of her inhibitions.

This time, Rtick let her linger on that act for long, so she licked and sucked his finger until he stopped her, took one of her hands and dragged her inside the room in front of them.

Dana liked the gentle way he used to pull her, but surprisingly for her – as he had never experience that kind of change in pace during sex – she liked, even more, the rougher manners he used to push her on the bed, and turn her around.

She lay there, on the bed, on her stomach. The arms at the sides of her head, her legs closed until Rick reached her and slightly opened them. She felt a wave of embarrassment, as she realised he could have been staring at her bare pussy in that very moment. She had no way to know it, though: everything but what she felt, was happening in her imagination. But she perceived the pressure of his body on the bed – close to her – and his passionate, wet kisses began covering her neck, her back, her armpits, her sides. No part of Rick, aside of his lips, was touching her body. For the first time in her life, she found herself totally exposed to a man’s lust, and she trusted him already enough to resign her will to him. She was aware of his touch and his presence as she had never been before, and yet that presence wasn’t occupying, but instead completing her personal space.

His kisses slid down, tracing the line of her spine, followed by a trail of goose bumps that soon spread on her whole body.  And the trail his tongue was leaving behind didn’t stop until his kisses were so close to her pussy that his warm breath teased her open lips. She knew what he was experiencing: she had just been intoxicated by her taste, her scent, and she knew that – by now – her pussy was wet and needy as it had not been in months.

Rick grabbed her by the hips and turned her around. It was so sudden that she had no time to wake up her relaxed body. As a result, for a moment, she behaved like a doll being tossed on the bed. A blind doll, completely at the mercy of the man playing with her.

And then, she lay on the bed face up, letting that man using her body at his will. He rested her arms on her stomach and spread her legs, then Dana felt the weight of his body moving down, on the lower part of the bed, and then his breath again on her nipples, on her stomach, on her mound.

Finally, the sudden touch of his lips on her clit felt like electricity spreading through her body. When his lips disclosed and then wrapped her sensitive button, the shock reached her head. Rick was sucking her clit with passion; rubbing it with his tongue, circling it, biting it with such eager that was, for Dana, the proof he had looked forward to that moment too. She thought she was starting to understand him a little. He liked to savour the moment, he liked to savour all the details. There was no other way to explain the way he was – literally –  eating her out.

“Mmm… Rick, this is so nice. Your tongue feels like silk, how can you lick so… aaaah… mmmm…”

Rick seemed to be deciding if it was the case to speak or if he could continue what he was doing. After a couple of seconds, though, he spoke.

“Your body is mine tonight, and so your voice. You should not speak without my permission. Stay quiet and, if you can, enjoy it.t Otherwise.. well, let me enjoy your body myself.”

She felt a rush of blood on her face tUsing her body? No man had ever talked to her like that, and she still had to fully understand the extent of their game. But she calmed down, and let him do as he wanted, again.

Moreover, his tongue work twas perfect. He was alternating long licks to her pussy to short, rapid attacks to her clit. His tongue felt like a pierced spears at moments, when he slid it in and out of her lips, and sometimes as warm silk caressing her skin. It was incredible, and still, everything that was happening to her body and her mind was feeling like part of a detached reality, watched from the outside.

Rick was still licking her. Or better, he was caressing her pussy with his tongue now, without putting any pressure, just enjoying those cuddles by himself, just enjoying her body.

After a while, he stood up and pulled her up from the bed. Her mind still blurred by the orgasm, she had no way to understand what was happening, until she felt her own dress under her feet and a voice behind her.

And then the blindfold fell and the only sound she heard was the click of the bedroom door closing behind her. It took a while to adapt her sight to the light

“To look forward to pleasure is also a pleasure.” Dana had read it somewhere, sometime before.

It was a quote from Gotthold Ephraim Lessing, and in that moment, as she slid her dress back again, she thought that Rick was the living proof of it.