In All Possible Ways – Part 10

In All Possible Ways – Part 10 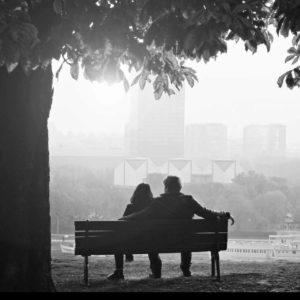 “Did you got what you need?”

Dana had a wide smile and relaxed eyes. Her orgasm had taken away all the tension of the evening, and in some way, her plan had worked. She had managed to take their game to another level, and she wasn’t sure it was even a game anymore, for her.

“Almost. You kept something for yourself, it seems.”

Dana smiled but didn’t elaborate further. They small talked for some time, and after the dessert, they left the restaurant. There was no taxi waiting for them, and it seemed Rick had decided to opt to go down the hill by walk, enjoying the sun setting in front of them. A narrow, badly paved path, stretched between the trees and clearings, slowly descending to the city.

It has to be said, that Dana wasn’t so thrilled by the idea in the beginning. She was wearing heels that night, of course, and even if they weren’t that high, walking in the dim-light of the setting sun on rocks and ground, wasn’t the best way to end such a romantic evening.

She enjoyed – at least – the contact with him. He had offered his hand and, soon, the hand had become an arm, and the arm had slid down to encircle her waist. That was a very romantic way to walk, and after some minutes of silent steps, the intoxicating scent of sweat, sex and cologne of that man, made her forgot about the discomfort of her feet.

The more she smelled that scent, the more her mind drifted away back to the dark room, a couple of minutes ago. Dana soon realised she was excited again. And indeed, she knew that one orgasm was never enough for her.

Even if she was still in need of pleasure, though, she enjoyed the walk until they reached a clearing close to the end of the path. She realised the walk had taken some time, because it was dark already: the only lights were filtering through the low trees in front of them, coming from the lamps on the nearest road. Nobody was around and they hadn’t met anybody on the path. It was, indeed, a very intimate atmosphere, enhanced by the screechy sound of the summer crickets that was covering the noise of the city. They were alone.

Rick pulled her out of the path until they reached the border of the clearing where – under one of the highest trees – lay a couple of benches.

Dana wondered how many girls he had brought there, but managed to fight with the thought. When she finally sat on a bench, an almost imperceptible sigh of relief shown Rick that the walk had not been just pleasure for her: her feet were sore. Even aware that it wasn’t the sexiest of her moves, she removed her shoes to free them from their cage.

Rick sat close to her.

“Give me your feet.”

“What? Here? I-“ Then she remembered. They were still playing, she was still supposed to see what he was capable of, and because of that… she was supposed to play along, even with all her fears, doubts and pride.

She turned a little and put a foot on his lap. Rick caressed it, and tenderly massaged her fingers, the sole, the arch, the heel. Slowly, without speaking, he continued massaging her feet alternatively. The sun had set; the night wasn’t cold, but it was very dark. There was no moon high in the sky and the faint light coming from the street was illuminating the far path but not their spot. Their eyes had adapted well to the darkness, though, so that they could see each other. Moreover, in the low light, the most visible thing seemed to be their pupils. Dana could follow his eyes easily and she was sure he could do the same with hers.

“Why such a romantic evening?”

Their eyes were speaking so much, that she realised she had actually said it only when he replied.

“I fucked you in a storage closet of a restaurant – or whatever it was. Is it your idea of a romantic evening?” He asked in return.

“No, that was me playing with you. If we look at the evening, you did nothing but being sweet and tender tonight. You’re even massaging my feet, for Pete’s s-“

“The evening is yet to come to an end, though. It may be my turn to play, soon,” he interrupted her.

“I never said I stopped playing.”

And such saying, Dana moved her foot a little farther and touched his crotch, happy to find him already hard.

She pulled away her foot and moved closer to him. Their lips almost met, but when she felt his hands around her waist again she pushed them away, then whispered.

She pushed him back on the seatback and reached down to him, quickly unfastening his buttons.

“Tonight,” she said sliding down his trousers, “I’m your goddess of passion.”

Then she stood up, looked down straight into his reflecting pupils, and sat astride him.

A hand reached down between her legs and found his hardness, standing proudly under her. In a swift, slick movement she pointed Rick’s tip to her entrance and let her entire body fall on him. She was wet, she was ready since long, she was still relaxed after the orgasm she had had before, and yet the depth Rick reached with that position surprised her in a loud, surrending moan. She leant her head on his shoulder and stopped all the way down until she caught her breath. Then stood up again, knelt on the bench, grabbed his shoulders and started moving on him.

First using slow movement, up and down, stimulating her innermost parts with his tip, massaging his entire shaft with the muscles she was gripping on him. Then when he finally began to breathe heavily, she began tracing small circles on his cock, moving her hips up, down, left and right. For the entire time, she looked straight into his eyes and slowly, she saw lust taking him over.

Rick had understood he had to let her lead and he was curious enough to see to which extent she was able to play, too. But the truth is, he had stopped calculating the moment she had sat on his cock. The feeling of her tender, smooth pussy, the feeling of her wetness pouring down on him, the feeling of her light body pushing him against the bench and, most of all, those eyes looking straight at his soul, was enough for him to forget they were on a bench in the open.

And so the lust became passion, and the passion became something more similar to an ancestral need. Without a rational reason, in that moment, all he wanted was her to continue what she was doing; all he desired was being inside that woman, being one with her.

Soon, Dana couldn’t restrain her second orgasm anymore. That cock pounding inside her, the chance to lead the man that had led her until then, the semi-consciousness they were both so silly to make love on a bench in a park, exploded in a sudden, long orgasm. For the entire time she continued to move, as waves of pleasure shook her body, and when she realised he was still hard inside her, even in the aftermaths of her orgasms, she didn’t stop. She smiled at him to show him her gratitude and stood up. But when he reached down to pull up his trousers, she stopped him.

“I’m not finished here. You’re not going home like that,” she said pointing at his groin.

Decisive, stubborn, proud; Dana turned around and sat on his cock again. Rick could see her back now, the silhouette of her body in the darkness and her loose hair bouncing up and down in rhythm with her. And this time the grip of her pussy on his cock, the way she conveyed her passion to him, drove him to the edge soon.

It took some time before they both had the strength and will to stand up, then they walked hand in hand to the road. In the taxi home, the atmosphere seemed different than usual. Something had happened – to her at last – and she felt there was no way back anymore.

Still, when the taxi reached her apartment, she gave Rick a quick kiss on the lips before exiting the car.

And as she walked home, the satisfied and yet melancholy grin on her face, said it all.