What If I Think I Deserve It?

Home / What If I Think I Deserve It?

What If I Think I Deserve It? 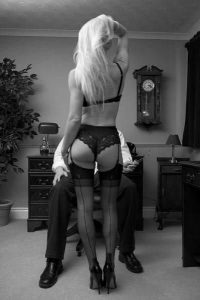 Everything had begun as the most innocent of games.

There had always
been some strange tension between Anne and her boss: unspoken things, casual
touches that lasted a little too longer than they were supposed to, and those
times she had caught him looking at her bosom or at her legs with lustful eyes.
But neither her nor her boss had never crossed the line of professional
boundaries.

Until that day,
just a couple of weeks before. She had made a silly mistake, forgetting to book
a flight she was supposed to book, and her boss had – for the first time –
shown her his angry side.

And in the heat
of the moment, he had pronounced words
beyond those boundaries:

“In a normal
world, you would deserve to be punished for this.”

She didn’t know
why, but his strict tone and that “punished”
word had sent chills down her spine. She had felt those well-known butterflies
down her stomach and before even realising
it, her answer had slipped through her lips:

“What if I think
I deserve it?”