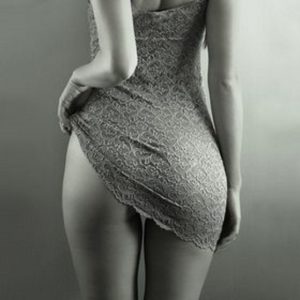 Michelle stood up and paid, then walked out of the shop. Alan was waiting for her there, holding a red rose in his hand: he was handsome, but above all, he knew how to behave with women. She felt flattered, especially by his long looks that lingered on her eyes, on her cleavage and her whole body, before giving her a welcome kiss on the cheek.

Michelle was a little disappointed. She knew he wanted more, and he knew she wanted more: so why that… cold introduction?

After his first call, they had exchanged a lot of messages. He was a real flirt, and she had decided to get along with him… there was nothing bad about playing a little, she had thought. But day after day, the whole situation had gotten out of hands. He had conquered her, and their messages had become hotter and naughtier. Now, he knew things that no one had ever known about her; not even her husband. He was the first man to know what she had really always wanted, ever.

Alan took her hand as he slowly guided her through the shopping centre. Finally, he dragged her into a big clothes shop.

“Let’s try out something: choose whatever you want, and I’ll eventually buy something as a gift for you.”

The warmth of his hand, his calm voice, his friendly behaviour; everything was perfect for her. She felt good, completely at ease. And flirty, so flirty when she was with him: how much she had dreamt of him in the past days, of his hands on her body, his lips on hers…

Her thread of thought was abruptly stopped: she felt his presence behind her, and his hand grabbing her ass. She froze: was it ok? Was anyone watching them? But she couldn’t move. She felt his hand exploring the round shape of her butt, then with his usual calm tone, he talked.

“I think you should try this grey and pink dress, don’t you think it could be nice on you?”

Then he squeezed her butt firmly. Michelle could feel his fingertips pressing into her muscle, and she tightened them up instinctively. Not even a second afterwards, she felt a light spank hitting her tensed muscles.

“You are mine today. You should relax, sweetie.”

But even if it was what she wanted, what she had always desired… it was difficult to finally loosen herself completely.

“I think I could try it. Anything else you think it may suit me?” Pretending to be at ease was the best way to eventually be at ease, she thought.

They were in the middle of the shop, between two shelves. The aisles were narrow, but there were people close to them, just a couple of meters away. She didn’t even know if there was someone behind her; because if there was, he was now looking at her naked ass.

“I’m sure we’ll find something else. We still have a lot to see, and I want you to buy some nice underwear too. Agree?”

Alan had lifted the back of her dress and was caressing her bare skin. She felt his fingers tracing the shape of her cheeks, exploring her.

“You wore a thong, you remembered what I like. Should I check if you followed my suggestions for today?”

Michelle didn’t even have the time to answer: he embraced her from behind, pushing his entire body against hers, with tenderness. He encircled her with his arms, kissed her neck and gently slid his hands under her breast, cupping her tits in both hands, caressing them; everything was done in just a single, gentle and harmonious motion.

Shivers run down her spine: it felt like having a lover; someone hugging you like that in public, someone without fear of showing his affection to you. It had really been a long time… and she savoured every moment of it, every detail. His lips touching her naked neck, his fingers looking for her nipples under the dress, teasing them, his sexy voice whispering:

“No bra, and excited, perky nipples…”

His hand slid down, between her legs. He lifted her dress just enough to be able to touch her.  Michelle was feeling so wet already: she just wanted to turn and kiss him right there, make love to him on the floor.

But after a couple of seconds, he moved a few steps back, leaving her like that: turned on, standing alone with half her ass naked.

“Take off your thong.”

She was there to play; she was there today to be his woman, and she liked the idea of being submissive for once. As such, Michelle lifted up the bottom of her dress exposing her skin even more, her pussy covered only by a white triangle of lace. She slid her thumbs on her hips and pulled down her thong. Her naked ass was, for a moment completely visible to any passerby… she felt a chill down her spine.

“Has anyone seen me?” she think of asking. But there was no use pronouncing those words, so she kept them for herself.

Then she turned back and gave her thong to him.

He brought it to his mouth and sniffed and kissed it, then put it into his pocket.

Michelle thought that simple act was so sexy… Alan smelling her panties; that man treating her scent as the most natural of things.

They walked across the shop for a couple of minutes, choosing various dresses and underwear to try. Michelle could feel her juices dripping down her lips already, but Alan simply continued to tease her all the time: he occasionally grabbed her ass; caressed her breast, her hips. He still had to kiss her, though; he still hadn’t even touched her bare sex. He could have felt how wet she was if only he’d touched her lips, her clit, or even just her inner thighs–

He was commanding her every now and then: asking her to flash her tits, her ass and pussy. She didn’t know if anyone else was looking at her or not. Either way, that feeling of freedom she was experiencing for the first time in her life was like a drug, and she didn’t want to stop. Feeling free while being guided by a man: it seemed such a nonsense before, but there she was, experiencing it in first person.