In All Possible Ways – Part 8

In All Possible Ways – Part 8 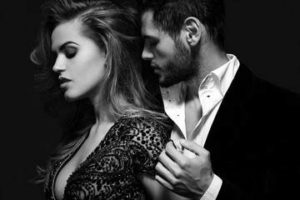 Dana had never been good at reading people. That had always been one of her biggest issues in finding the right partner, and the reason why she had actually never found him. She’d always discovered only after a couple of weeks of a relationship, that he wasn’t the right men for her.

Moreover, she had this strange pride that often prevented her from admitting someone else was right. She was not keen to surrender, in those moments, and she would do everything to try to convince someone.

That morning, thinking about the night before, with the memory of what she had felt still vivid in her senses, she realised Rick was proving her he had been right all the time. A man could have enough fantasy to lead a woman and to turn sex into a different experience every time. In fact, that particular man seemed to be very good at it, way better than her.

But that was easy when sex was the only thing the relationship was based upon. She wondered if it would be the same in a couple. Would love spoil the fun? And with the awareness of what she had just thought, came the realisation that for the first time in years she was thinking about love again. A remote, feeble chance… but still love.

There wasn’t a moment, in the following days, when she didn’t think of a new way to bring him to the edge, of a new way to allure him. And even if everything was new for her, even if that feeling growing inside her was something she still had to understand, she knew that wasn’t bad.

Friday arrived soon, but with it, didn’t arrive the usual message. Dana spent the evening on her couch, drinking wine, checking her smartphone every couple of minutes, watching the TV and thinking. As always, that man was able to uncover her weaknesses, and with that her subtle lack of self-confidence. Again, she started thinking that maybe he didn’t like to fuck her, maybe he didn’t like her body or the way she had dressed, or-

It was only on the late night that her smartphone vibrated and the usual, green led blinked on the black ceiling of her room. It was already during the the next morning breakfast when she sleepily checked the phone, that her heart sank.

That single message had relieved her of all the previous doubts and ignited a new, different fire, inside her chest.

She thought for long, before answering him. That was the first contact he had ever tried with her, out of their game. Or was it part of it? She couldn’t know. But whether he was playing or not, she could answer with the same tone and pretend to be playing in case anything went wrong.

The truth is, her finger was shaking as she wrote the answer.

It was time to begin her counter-attack.

The following evening she was at his apartment, and this time she rang the bell without fear.

They had chatted a little in the previous day, mostly about petty things, but it was something more intimate than the chatter at work or the sex they were doing, something beyond the barrier of their feelings. Finally, they were knowing each others as persons, not only as colleagues or sexual partners.

Dana had acquired a new awareness of herself and finally decided what to do. She wanted him, she’d try to get him. She also knew, though, that Rick wasn’t the type of guy to be easily led: she’d have to play it smart, she’d have to let him lead the game until the right moment. Finding it could have been a problem, though.

That evening she had worn a nice, black, dress with a very low cut showing most of her cleavage, and no bra. It was a dress she had once worn for a special occasion and forgot to possess. It was bold, daring: the kind of dress you wear when you want your man to look at you with lustful eyes.

She knew Rick had a special plan for that evening because he’d asked her to dress well for a night out. And she had an idea to tease him, a nice, strange idea. Everything was prepared: she only needed the courage to act.

As soon as he opened the door, she noticed he was dressed differently than usual. He was wearing shoes, he was wearing a light jacket over a not usual high collar white shirt, which first buttons had been left open.

He didn’t let her enter the apartment, but exited and closed the door behind him.

“And my compliments for your cleavage, by the way,” he commented once he had given a good look at her, in the elevator. “You look stunning. Perfect for the place we are going to.”

Downstair, out of the building, a taxi was already waiting. She hadn’t noticed it earlier and when she saw it, Dana wondered if it had arrived later or if she was so into Rick already not to notice the details around her.

Inside the taxi, apart from his hand caressing her naked leg from the knee up, lifting her dress a little too up than she’d expected in a public place, nothing happened until they reached a famous restaurant on a hill in the outskirt of the city. He offered her his arm that she gladly took, and they headed together to the entrance. Before entering, Dana made her first move: she leant on his shoulder and whispered into his ear.

“Tonight, I’m going to play with you.”

“Aren’t you, some weeks already?” He answered, laughing.

“I let you take the lead, but I cannot admit defeat this easily,” she replied cheekily.

And that saying she sneakily slid something into the pocket of his jacket and left his arm.

The restaurant was nice and romantic, the music and the low light gave it a special, intimate atmosphere. She wondered why he had chosen that place – maybe because it wasn’t likely frequented by their colleagues? –  but decided to kick away that useless thought to enjoy the moment.

They sat, they chose the wines and the starters, then the waiter left. They were sitting in a corner of a nice veranda and only a few other couples were there with them, distant enough not to hear what they were talking about.

As soon as the wine arrived, and the waiter disappeared again, she made her second move.

“A gift?” His brown right eyebrow lifted up showing his surprise.

“Look into the pocket of your.”

He touched the sides of his jacket and noticed the shape of something. After a few seconds, he was turning on his hands a small device with a control wheel and some buttons.

“What’s this? It seems some kind of remote control,” he asked.

“I dunno,” she said mysteriously. “But I think you should try it.”

Rick pressed some of the buttons, turned the wheel and played with it without apparently any result.

“Well, whatever it is, I’m sure it’s broken,” he said placing it in front of him, on the table.

Dana had some problem talking, already. When she had bought the device that very afternoon, she had never thought it could be that effective. And the moment Rick had begun playing with the buttons, the little egg she had inserted inside her had begun vibrating. It was a low, subtle vibration, and she was sure no one could be able to hear it – she’d asked the girl of the sexy shop more than once about that – but she wasn’t sure she herself would be able to keep quiet for long.

“If it’s working, I don’t know what’s its purpose. And what about this?” Rick turned the small wheel on the side of the remote, and the device inside her started vibrating quicker.

Dana could feel already her juices pouring out, her panties getting wet.

“Or maybe if I press this button, something will happen?” Rick pressed a button, and the small egg began pulsating inside her. She was feeling shivers around her entire body and waves of goose bumps in rhythm with each pulsation. She gripped the table so hard that her knuckles whitened.

“No, I really don’t know what this is. But I’m sure that if you have bought it, it must have some kind of special effect. On me, or on you?”

He nodded at her and at her nipples, now standing hard and clearly visible, pointing at him through the fabric of her dress.

Now she was sure, Rick was absolutely aware of what that device was for, and he was purposely pretending not to. When she reached out to the little remote control to take it back, though, he was faster.

“Well, let’s put this away for now, shouldn’t we?”

He put it inside his shirt pocket, visible to her but out of reach, still activated. And with the egg vibrating inside her pussy, Dana couldn’t concentrate on anything. Her body was on the verge of exploding, all of her muscles tensed as a bow ready to unleash its arrow… and then it stopped.

Rick had turned off the device. Her orgasm disappeared, swallowed back again inside her, and when she opened her mouth to complain – almost angry at him – she realised the waiter had just arrived with the starters.

Rick wanted to keep that game only between the two of them, and as the rush of blood slowly left her face taking it back to its normal colour, Dana felt grateful for it.